Manning is leading the NFL with completions (237), passing yards (2,919) and total touchdowns (30). 29 passing touchdowns it’s easy to see why he’s the leading vote getter for MVP. At age 37 he’s still at the top of his game and can still shred defensive’s to pieces. He has the best receiving core to throw to in: Wes Welker, Julius Thomas, Eric Decker and Demaryius Thomas.

Sherman has a big mouth and he can trash talk with the best of them. What he’s best at is taking a wide receiver out of his game and frustrating him with press man to man coverage all day long. He’s All-Pro season one year ago wasn’t any fluke and he’s taking his game into another level. He’s signature play came on the road in Week 4 at Houston, where he picked off a pass and returned it for a touchdown to help Seattle beat Houston in Overtime. Sherman has four interceptions on the season and is the best player on one of the best teams in the NFL.

Lacy has given the Green Bay Packers some punch and power in the running game. He leads the Packers in rushing with 446 yards and 3 touchdowns. He’s been a consistent presence for Green Bay week in and week out. He’s a big reason why the Packers are 5-1 and are a contender heading into the 2nd half of the season.

Not many people know about Kiko Alonso but he’s already one of the best young middle linebackers that the NFL has to offer. He’s quick and can shed blockers to make plays in the running game and athletic enough to cover tight ends in space. He’s registered 81 tackles, one sack, one forced fumble and four interceptions. Alonso is a playmaker for a young Bills team and by the end of the season you’ll be hearing he’s name more often.

Rivers has certainly bounced back from really poor seasons in 2011 and 2012. He has a new Head Coach in Mike McCoy and he’s playing with a renewed sense of purpose. So far Rivers has thrown for 2,132 and 15 touchdowns. Rivers has also posted an 111.1 Rating which is his highest rating ever. He’s regained his confidence and playing at a high level.

6) Coach of the Year: Andy Reid

It was clear that Andy Reid needed a change of scenery from Philadelphia. After coaching in Philly for over 10 years, Reid was fired and landed in Kansas City. All he’s done is go 8-0 with he’s new team. He’s got a quarterback in Alex Smith who doesn’t make mistakes, a dynamic running back in Jammal Charles who is lightning quick and can score from anywhere on the field. Last but not least he’s got a beast of a defensive that harasses quarterbacks and stifles running backs on a weekly basis. His new voice and winning ways has given life to team that had the worst record in the NFL last season.

Eli Manning is one of the better quarterbacks in the league but he’s not having a good season so far. At one point the giants were 0-6 and expecting to make the playoffs this season. Now it isn’t all his fault that the giants have played so poorly. He has no running game to speak of, he doesn’t have a very good offensive line to protect him. Manning has thrown 15 interceptions compared to 10 touchdowns. He’s only completing 55.7% of his passes and has a passer rating of 68.4. Not so gaudy numbers for a former 2x Super Bowl MVP. Eli is a good quarterback in the midst of a bad season but he and giants still have time to turn it around in the awful NFC East. 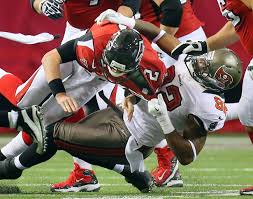 615 × 484 – ajc.com
The Atlanta Falcons were one game from the Super Bowl last season and they even talked future Hall of Fame Tight End Tony Gonzalez out of retirement.  Now at the halfway point of the season they stand at 2-5. Their season has been wrecked by injuries and heartbreaking losses. They’ve lost four tight games this season. Wide Receiver Julio Jones is on the shelf with a season ending injury and Roddy White can’t seem to stay healthy. They’ve struggled mightily on defense and can’t seem to get stops at key moments of a game. A season that started with such promise for the Falcons has turned into a dud right before our very eyes
9) Breakout Player: Andrew Luck 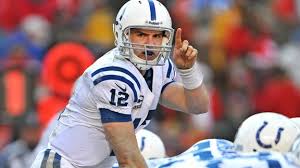 576 × 324 – espn.go.com
Luck was chosen #1 overall in the 2012 NFL Draft. In his Rookie year, he led the Colts to an 11-5 record and a playoff birth. In his sophomore campaign he’s put up 10 touchdowns to only 3 interceptions and he has an 60.7% completion percentage. In match ups against Peyton Manning, Colin Kapernick and Russell Wilson he’s out performed them all and earned victories against all of them. The Colts have earned the most impressive wins on the season by beating Seattle, San Francisco and Denver. At 24 Andrew Luck is on the door step of being one of the upper echelon quarterbacks in the NFL.